Interview With An Ex Yarn Hoarder 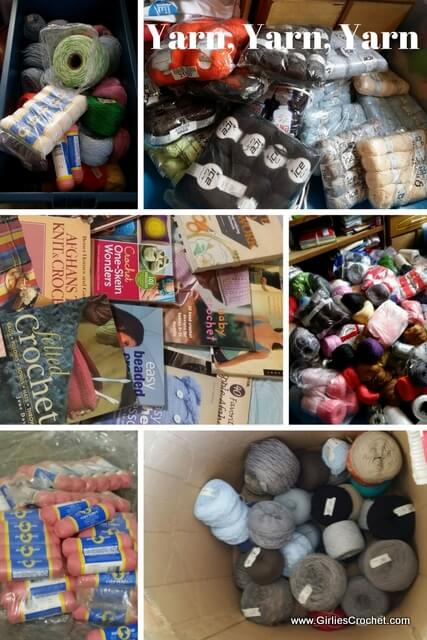 One of the many perils that a crocheter might face is yarn hoarding. 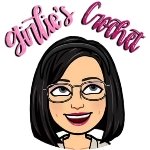 I met her 6 years ago in one of the meet and greet I attended in the Philippines. After 6 mos of that same year, I was able to see and visit her apartment to buy some imported yarns which was not available locally.

Here are some of the creations I designed using some of the yarn I was able to purchase from her. 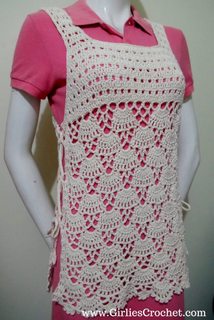 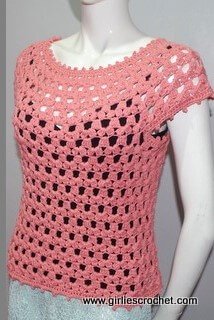 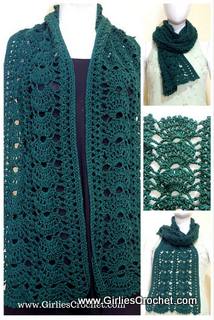 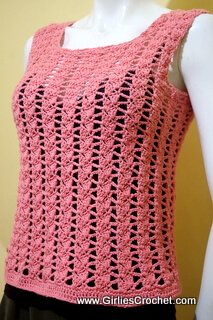 About 2 years ago, when we talked about our future plans for our crochet hobby, she had mentioned to me that she wanted to de-stash  some of her yarns  to raise some money. I have been witness to her current journey. I have also benefited from being able to learn through her experience. It was such a wonderful experience seeing her go through her journey and making that positive leap to becoming a better person. I wanted to share her experience to other crocheters who might be or are on their way to being in the same situation.

I asked her if I could Interview her and share her story. It is an inspiring story and will surely benefit all of us. I would also like to take this opportunity to thank her for sharing her journey and how she turned things around from a potentially debilitating condition to a money earning endeavor. Here is the interview.

1. Do you intentionally keep these yarns?

I used to have an online yarn store back in 2012, so part of my yarn stash are yarns I bought as store inventory. I meant to resell most of them. 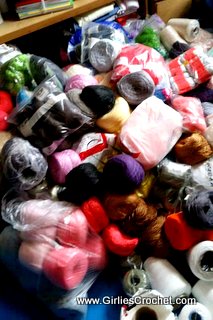 The other yarns are my personal yarn collection, ones which I bought for personal use and experiments.  I did not, however, intend for the volume to reach this much. The last final count I made, prior to de-stashing, I found out I had 163 kilos of yarn.

My collection reached that much because I have hidden the yarns away from my sight, so I don’t know that I already owned a lot and I kept on buying. I have this habit of buying all colors that I like for each type of yarn that I like, and in multiple cakes or skeins. I justify that by thinking that I make big long projects anyway so I don’t like running out of yarn.

2. When do you consider that your yarn collection eventually turns you into a yarn hoarder? How  many boxes did you have?

I would say that it is not the exact volume of yarns that will make you a hoarder. If you are a store owner, you would naturally have, and I would say, required to have, a room full of yarn.

If you are a yarn designer, you would also have different designs in your stash, like some sort of portfolio. I don’t think you can call it a portfolio if you only have 5 skeins.

A person with 50 kgs of yarn, and a person with 100 kgs and another person with 1 metric ton of yarn, are all yarns hoarders if they obtain and acquire yarn in the manner consistent to hoarding. 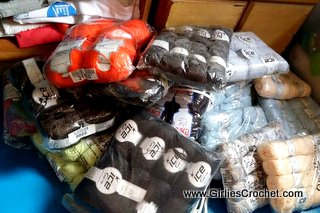 Whereas, another one with 2 metric tons of yarn is not a yarn hoarder, simply because it is her job to have that much. Say yarn supplier or manufacturer (think indie yarn dyers, with a lot of yarn for their re sellers to choose from).

What makes you a yarn hoarder, is the behavior in which you acquire yarn.

You are a hoarder if you just acquire and acquire for the sake of acquiring yarns.

3. How long do you hoard your yarn? And when do you start to feel that you have to de-stash it?

To sum it up, my yarn stash reached 163 kgs, and that is the result of consistently buying yarns since 2008 to 2013. That’s 7 years of buying yarns and not crocheting that much. In between that I restock for a yarn store, which I eventually closed in 2013. 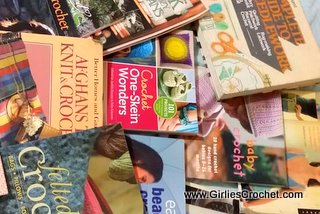 I only started to snap out of my hoarding pattern in 2011, when I got married and realized that my hobby ( crochet ) and the related yarn hoarding, is no longer helping our budget. That’s the trigger.  It is not the volume and not the amount that went with the purchase that triggered it.  It’s the realization that my seemingly harmless hobby, or pastime, is no longer helping me and somehow already aggravating my other personal problems.

I would say that my first attempt in yarn de-stashing for cashback is in 2011. It led to the online store I put up in 2012.  Those attempts failed.

I attempted again in 2016, which is more successful. I have let go about 85 kgs already.

4. Do you experience difficulty in de-stashing your yarn?

Now that I am on the last leg of my de-stashing journey, I can say that it‘s not as hard as it was when I started.  The difficulty lies in letting go of the yarns. There is separation anxiety, which is just the same as any separation there is in the world. 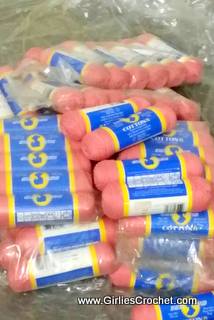 When you let go of your yarns, you are also putting to waste the time you spent looking for the yarn, for example you imported it from Ireland, like I did. It is time you spent researching and waiting for it to arrive.

When you let go of the yarns, you are also letting go of the potential that you will not be able to replace it if you really needed it in the future. That is perhaps why most people are really anxious about it. That question of “what if I will need it”?  And that is the same sentiment with everything that you are going to let go.

The main difficulty with de-stashing is letting the yarns go.

5. What yarn do you find most difficult to de-stash / sell?

I don’t think that there is a yarn which is difficult to sell. It is not the yarn that makes it difficult. It’s the price tag you put into it.  Give it away for free and you’ll be empty in 15 minutes.

6. Have other people (such as family members) helped you to remove (or forcibly removed) some of your possessions? If so, how cluttered was your house/room before their intervention?

NO one has forcibly taken away any item from me. But If you meant it in a context of a robbery, I was a victim of a snatching incident back in college. Hahahaha (no, it is not funny) or maybe the taxes that the government is forcing out of my salary, yes,..  but that is done with legal force  and under the constitution. hahaha 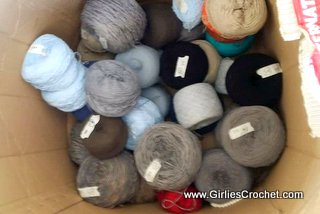 My house, was not cluttered, if you meant it to be uninhabitable. In my apartment the yarns are kept in boxes and kept in a safe storing place.  At some point, an entire room is dedicated for my yarns alone. It was my craft room.

Contrary to how I made it sound, or implied the idea, that my house is full of yarns, it is not really. It’s just that I know where they are and I just felt that all available storage are filled with yarns.

My husband has voiced out his concerns that he is no longer happy with the manner that I am obtaining yarn. He has supported me with this hobby ever since, and even gifted me yarns multiple times. He has also bought me my first crochet hook set. 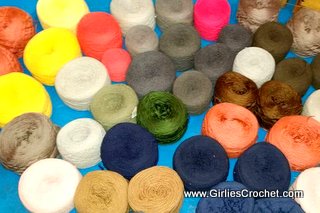 He has strongly objected though, to the manner in which I conduct my online yarn business in 2012. He objected to it so much that it has put a lot of strain in our marriage. My husband does not want me meeting up with random people, and there is particularly one, when he put his foot down and downright prevented me from continuing the acquaintance.

After that he requested me to do something about the yarn volume that I have accumulated because he argued, I will no longer be able to use them, even beyond the afterlife.

7. Do the difficulties discarding or the clutter interfere with your family life, friendships, or ability to perform well at home or work?

On the contrary, this 2nd attempt for de-stashing has helped greatly with my well-being. Not only is it the most liberating thing in the world, it is also the most fulfilling thing. You see, successfully de-stashing is more like reversing completely the yarn hoarding and all the problems with it.

8. Any advice you want to pass on to potential yarn hoarders.

Buy the yarn. Get it over with.

And after you’ve bought it, take it home, and use it. Every single yard of it.  Don’t buy another skein if you haven’t used the last one you bought.

Easier said than done, but you get the idea.  The key is to know when to stop. 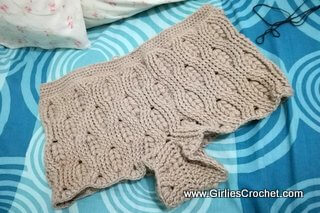 I know that at some point, my yarn collecting, as I used to call it, is not just a case of me buying yarn. It is a means of escape, a means of pick-me-up when I feel sad. It is actually more of a retail therapy, rather than “hoarding” which is an actual mental condition.

I think people around the world just coined the term “yarn hoarding” because it has elements of the actual mental disorder called “hoarding”, where in a person just collects and collects in large volumes of yarns which they are no longer able to use. There was, I think some truth and humor into it.

I was able to address the other personal issues that surrounds the yarn hoarding that I did in the past 10 years. I did it one by one. The ability to de-stash is just a sign that I have addressed my issues, it was never really the main problem, although I admit that I made it sound like that, because that is what I thought it was before. 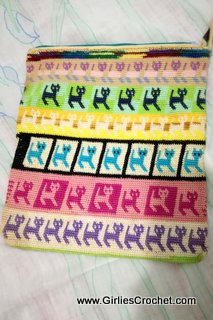 So my final advise?

Don’t be frightened if you amassed a large volume of yarn. There is no rule that says you can only own a certain quantity. It is not illegal.

It is not bad.

However, if your hobby is affecting your finances, straining your relationships, and you really won’t be able to use the yarns, you’ll know that at some point you will have to stop buying.

Selling the yarns themselves will not solve your problems, but it will help with the finances a bit. And if it’s a clear mind that you need, letting go of clutter and excess belongings always helps because it makes you busy with other things and for some reason you’ll get more space. And isn’t it that a less cluttered home and a less cluttered mind can do wonders with problem solving. They’re all connected in some ways.

Have your say about what you just read! Leave me a comment in the box below.

Everything You Need To Build An Online Business - Solo Built It! 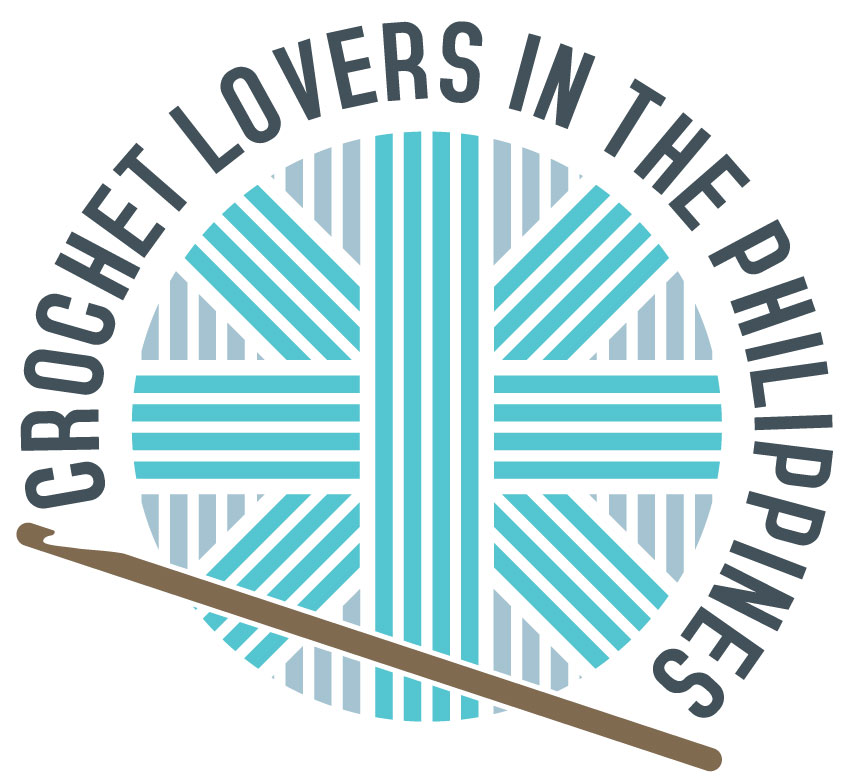 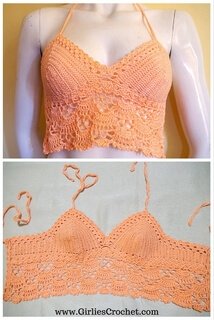 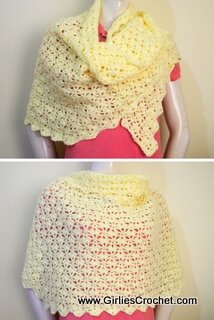 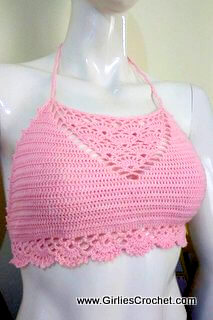 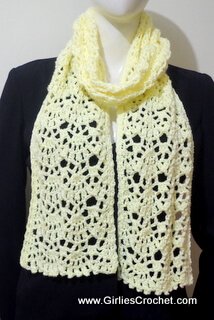 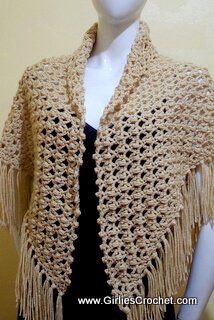 Click Here  for  PDF file format  of most requested patterns.

If you like to support my work as a crochet designer, buy me a cup of coffee.

Powered by Solo Build It